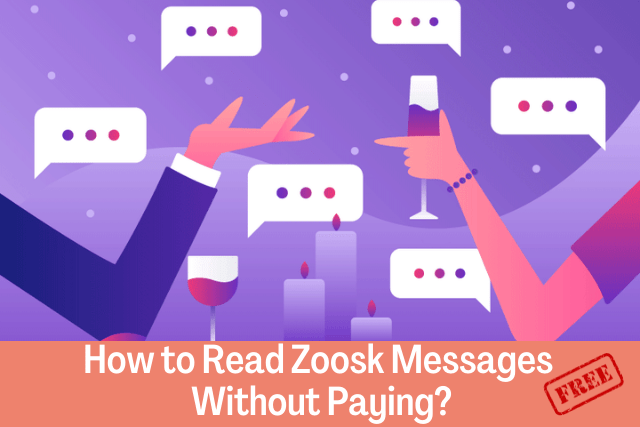 You’ve already heard about the popular dating app Zoosk and are interested in finding a partner there. But is it possible to send or read Zoosk messages without paying?

Can You See Zoosk Messages Without Paying?

You can do many things in Zoosk as a free user but unfortunately you cannot message other people. It’s a common tactic used by subscription services to get you to take their subscriptions. They want the money in your pocket.

Zoosk also has a free membership tier and a premium one.

What Exactly Do You Yet As a Free Zoosk User?

Zoosk claims that it has over 40 million users that send over 3 million messages every single day. Even if that’s half true, you have a potential audience of millions to chat to on this dating platform. It has a web-style interface with profiles and a search function and a carousel where you can swipe left and right.

Although Zoosk has two tiers of memberships, a free membership tier and a premium one. There are also extra things that you can buy called Zoosk coins which you buy separately from your subscription.

But, free users can also do many things. Free users can create an account for themselves and a profile, add profile pics, send smiles and hearts to other users and view other people’s profiles. You can also use the platform’s search function to see who is around you.

But there are some things that free users cannot access. Free users cannot send messages, use the Zoosk Smart Picks feature, use the incognito mode, use chat or see who likes you. These are all locked behind the subscription. Subscriptions are monthly plans unless you buy the 3, 6, 12 month packages but they will also auto-renew.

The cost of subscriptions that you can buy on Zoosk are:

Is It Worth Paying the Monthly Fee For Zoosk?

The answer to this question depends on what you want from the app. If you’re serious about dating, then you’re going to have to subscribe at some point. There’s no sense looking at potential matches, polishing your profile and being available on Zoosk if you cannot message anyone.

Unlike other websites or apps in Zoosk you cannot interact with other users if you’re on the free tier. You can send a smile or heart but that’s the equivalent of messaging someone with just ‘Hi’. That isn’t going to get you anywhere.

If you want to get anywhere on dating apps, you have to subscribe. Some offer more for free than others but in the end, you need the full features of the app. Dating is difficult enough as it is without being hamstrung by only having limited features or only a couple of swipes per day.

If you’re not so serious about using these dating apps then you don’t have to pay. The free membership tier is great for larkers or for those who want to see who around them is on the market without being too obvious about it.

One thing to be aware of as a free Zoosk user is that the system will often send you messages that look like someone is interested in you. The wording is very clever and makes you believe a real person has messaged you. As a free user you will be alerted to that message but you won’t be able to read it. Only once you pony up the subscription will you read messages.

If this happens to you as a free user, you will likely find that the message you thought was from a potential match was actually a system message with some special offer. It’s a common tactic and one many free users have complained about from Zoosk.